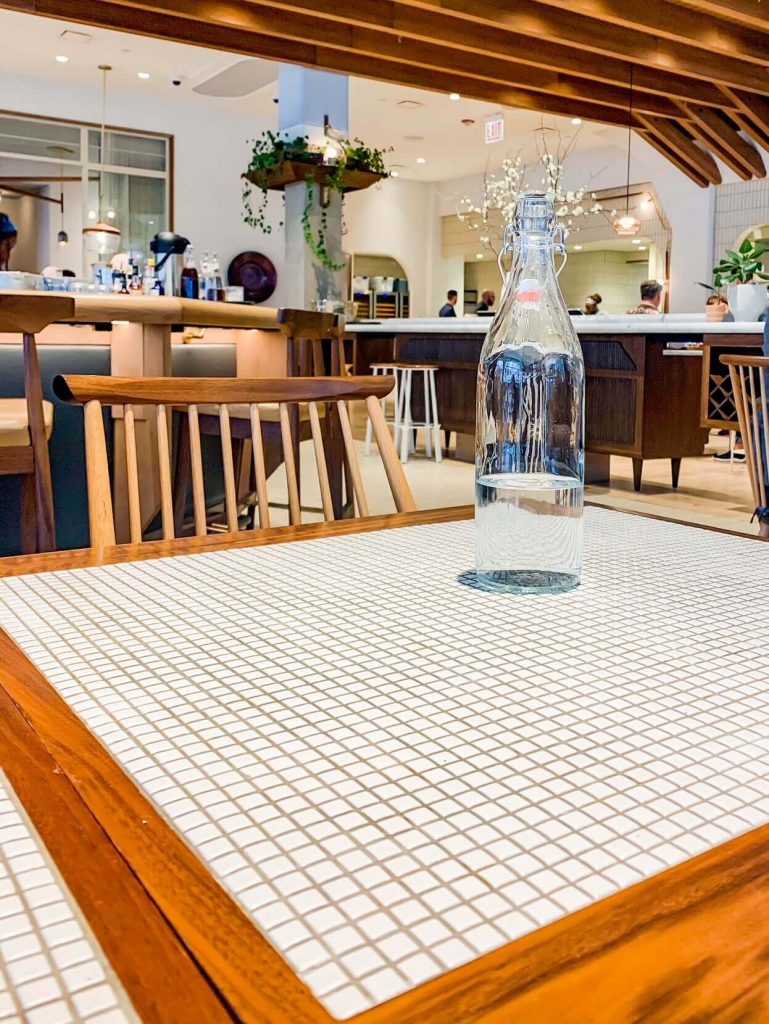 It’s that time of year! Drinking water is cool again! Every year without fail people on the internet want to “drink more water.” Despite being a bored-hydrator as well as a thinking-hydrator, I am among the many with the goal of drinking more water.

I always get a bit frustrated when trying to find tactics for staying hydrated, because I’m often met with solutions that involve fruits and apps and all kinds of stuff that I am realistically not going to stick with after a few days. It’s all the more difficult when it’s freezing outside and a warm cup of anything sounds better than an ice-cold glass of water.

In the past few years, I have dedicated more time and effort to staying hydrated and these are my secrets to actually enjoying hydrating:

People who “don’t like water” confuse me deeply. I think sometimes, they’re just not drinking the right water. There’s an enormous spectrum when it comes to quality of water, but I’m talking about a less intensekind of categorization: temperature. For example, I don’t like ice in my water, so I don’t put ice cold water in my bottle. Easy enough.

Note: Temperature control isn’t always an option when in the office/at school/in a land far-far away, but the idea is to seek out water at a temperature you like when possible.

Choose a bottle or cup wisely

Maybe I’m a little persnickety, but what I’m drinking my water out of really makes a difference.

In high school I would bring two Swell bottles to school: one with coffee, the other with water. (The amount of times those babies fell out of the side pockets of my backpack is embarrassing, not to mention messy for the brief period of time I used a sports cap on the coffee bottle…) Come time for dance classes after school though, those bottles weren’t practical.

Nobody has time to unscrew and re-screw a bottle of water during an intense sports practice, so obviously they use those pop-up sippy things like on the green Gatorade bottle that’s graced every field sideline ever. Bottom line: different bottles fit different lifestyles.

Now, I drink water out of a tumbler with a straw a) because it’s fun, and b) because I drink water sooo much fasterthis way. Get creative with it! Some fun ideas include: coffee mug, wine glass, novelty cup from an event, the cup you got iced coffee in yesterday, and on and on.

The glorious world of water filters

Let me tell you a story of the laziest girl in history: *Lights up on a 20 year old sorority girl reclined in her top bunk, twin bed. Tapestries, fairy lights, and far too many Greek letters adorn the walls. Parched after crying over 5 straight episodes of Grey’s, our protagonist reaches for her swell bottle only to realize—alas! It is empty! She envisions the two-flight journey to the kitchen sink, and contemplates her alternative: walking across the hall to the bathroom to fill up from the tap. Exhausted at the thought of going all that way, she remains in her bed, dehydrated, and clicks “Yes. I am still watching.”* Fin.

I have never had a problem drinking tap water, but I’d be lying if I said I couldn’t taste the difference. No shade to central Indiana (ok some shade), but the water just doesn’t compare to Chicago’s. I’ve been spoiled by growing up with Lake Michigan water, which is arguably the best, so when I got to school I had a rude awakening.

Moral of the story is that after 2.5 years of not using a Brita filter, I finally converted and swear by it. I consistently drank about a pitcher a day because it was right there staring me in the face, and I knew it would taste refreshing!

Here’s a little tip for hydrating in the morning: In the evening, fill a mug with water and set it on your bedside table, next to your coffee maker. That mug is now your designated vessel of the morning. You have to drink your water before you can drink your coffee. We are all just children in bigger bodies with more complicated attachment issues, so making a game out of habit formation is going to motivate you to commit to it.

This trick only works if you’re committed to it; respect the mug and she will respect you. If you are some monster who wants to steal all the water from the fishies, by all means, cheat and pour it out! But, if you’re genuinely not able to drink that much liquid first thing in the morning, at least water your plants with it, or fill it up halfway the next time.

Lastly, if you are not a coffee drinker, or the thought of chugging room temperature water disgusts you, place your vessel of choice in the fridge in front of your breakfast food. If you don’t eat breakfast OR drink coffee, I don’t know man, talk to your doctor.

I hope that this inspires you to go drink some water; your body and mind will thank you! How do you like your water? Toss it in the comments!

P.S. I first heard about the mug trick from my good friend, Abigail.