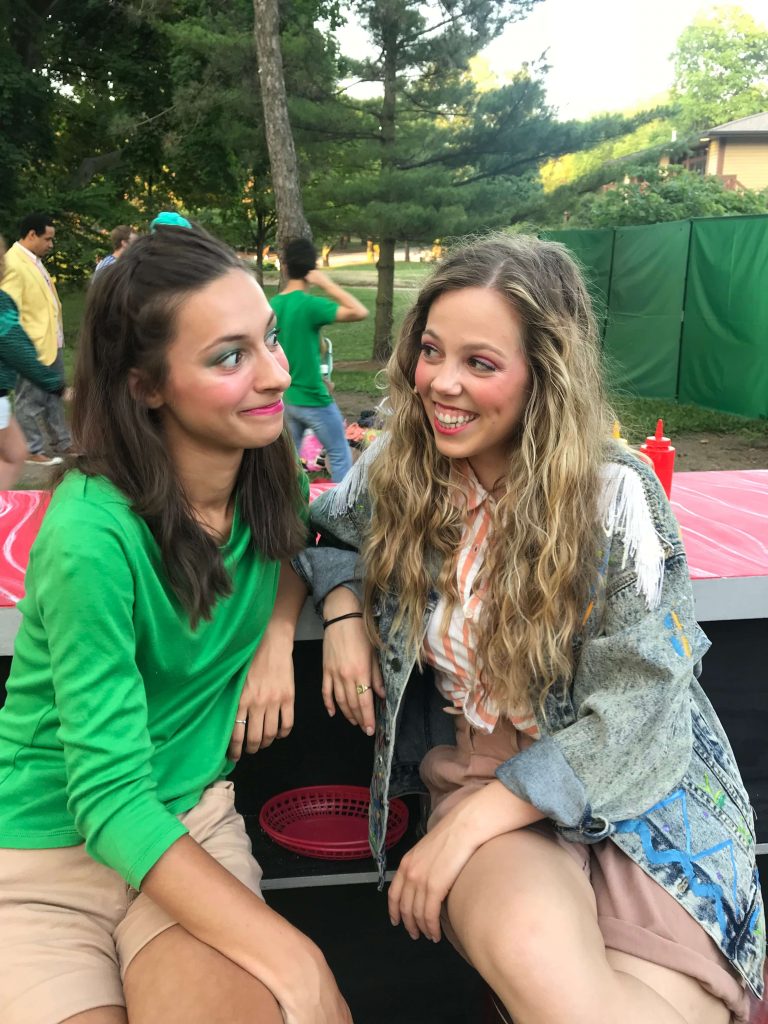 As I reflect on 2018 there were certainly highs and lows, but when all is said and done it has been my best year yet. I’m a big believer in blessings in disguise and was given many gifts this year whether I acknowledged them as such at the time or not. My year was filled with blessings big and small and it would take me days to write about each of them so here are a few of the major ones:

To begin my year I was given the gift of friendship. it was one that I would not open until months later though. Last January I attended sorority recruitment at IU. I did not know what to expect and I have a supremely active imagination that likes to create unrealistic and anxiety-ridden scenarios. I was nervous to say the least.

Literally EVERY single person who has gone through recruitment, circa 2018, 24/7

I was worried about what the women rushing me would think of my appearance, personality, or interests. I knew a little bit about some of the chapters and definitely had preconceived notions about most of them. Even though my initial ranking from the first round looked far different from the list I was left with in the end, I wouldn’t change a thing. After receiving my bid, I was still nervous that I wouldn’t make genuine friendships and would never feel truly comfortable there. Now I am confident that I ended up in the right place for me and actually enjoy l iving with 100 of my tube-top-borrowing, pizza-eating, sometimes-studious ~sisters~ under one roof.

In February I re-auditioned for a musical theatre program. This was something that I debated doing for fear of failure. I didn’t get into the program, but was granted access to certain classes. Access to those classes was not the true gift; it was realizing that I am in charge of creating opportunities for myself. Rejection is a huge part of life as I have and will continue to learn the hard way. That audition taught me that there’s no sense in letting past failures keep me from pursuing new opportunities. Since that audition, I’ve dedicated time to setting goals for myself that would have caused me anxiety before. This year I began to find my voice and learned to advocate for myself to reach those goals. If I’m wholeheartedly going after things that I care about knowing that it’s going to be ok if things don’t pan out, what have I got to lose?

The past few summers I have been blessed and cursed to performed at an outdoor theatre by Lake Michigan. Performing outdoors ranges from magical to miserable. Singing and dancing under the stars (and sometimes the rain) is worth all the mosquito bites, sunburns, and sandy feet in the world. This summer I spent my time on stage in the fictional town of Bomont as Wendy Jo in Footloose. I was also given the opportunity to be the dance captain. I had dance captained shows before, but Footloose was the first time I was able to find a balance in being an “authority” figure and not feeling bossy. Giving direction and being in charge came naturally when I was younger (when I was two a stranger on a train called me Milosevic) but at some point I lost that instinct…perhaps a good thing for a while. Through Footloose, I rediscovered my ability to lead confidently, knowing that I was competent enough to do so.

My the first day of freshman and sophomore year of college are neck and neck for the Helen’s Most Terrifying Day of School Award. Freshman year was full of the unknown, but what I knew going into sophomore year…I wasn’t sure I liked all that much. When I moved into my sorority house, my fears continued to badger me. To combat this, I asked my neighbor, Eileen, to hold me accountable in attending any and all social events the first week of school. I am the bubbliest, most outgoing introvert you will find in the Midwest: a concept that never ceases to confuse me (and anyone I’m close with.) As someone who loves to be around people but needs alone time to recharge, I told myself

The key for me this year was learning how to maintain being myself in different environments. (Definitely an ongoing process.) I realized that I don’t need to sacrifice who I am in any way for anyone in the world. I grew up this past year, growing closer to some and drifting from others. No matter what, I still have me. Regardless of where my relationships are now versus where they were this time last year, I am more myself than I have been in a long time.

Pause and rewind to my realization in February about creating my own opportunities: I auditioned for every production I could at IU in the first few weeks of school. To my surprise, I got into one of them and it was the perfect show to start off my collegiate theatre career. I played a phantom in The Rocky Horror Show which allowed me to sing and dance every single day. At the beginning of the semester my friend told me they were “waiting for me to get a win.” I didn’t understand what they meant at the time; I thought I was doing great. I had been given all the gifts I’ve written about plus many more.

I didn’t realize that I was lacking confidence in myself until I gained some. I am all about working hard and embracing the hustle of life, but I can get frustrated and lose sight of my priorities sometimes. Being part of this cast gave me confidence that I can and will prioritize my art over other parts of my life when necessary and the confidence that I am capable of more than I know.

2018 brought many opportunities to connect with new people, but the best of those new relationships were with some amazing kids. I participated in Indiana University Dance Marathon and College Mentors For Kids. Through these organizations I’ve found my place at Indiana. Service and philanthropy had always been emphasized in my schools growing up, so transitioning to an environment that doesn’t hold me accountable proved challenging. If I want an opportunity to give back at Indiana, it is my own responsibility to find it. These programs specifically made me think about how I can give more of myself everyday– not just at organized events. These kids reconnected me to a part of myself I had lost touch with freshman year and I hope to keep giving this gift that I’ve received.

I am so very thankful for each day of this year for forming the person I am becoming. I cannot count on all my fingers and toes the amount of people who came into my life or I became closer with this year that I am grateful for. If 2019 is half as wonderful as this year, I’ll be one happy gal.